Skip to content
HomeThe Resistance is Real – They’re All Here at the Network for Public Education Conference! 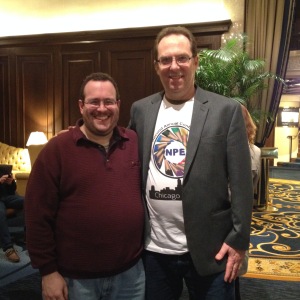 An old adage says, “The most radical thing we can do is introduce people to one another.”

If that’s true, then the Network for Public Education conference in Chicago may be the most radical gathering in the history of the world!

I wasn’t checked-in to the hotel for more than a minute before I ran smack into a colony of Badass Teachers.

But these are at least people with whom I’ve actually engaged. We’re all in the Badass Teachers Association – many of us on the leadership team.

We plan actions, incite twitter storms, write articles and all around raise Hell about the standardization and privatization of public education.

But meet them in person!? No. I’ve never done that… until today.

And is that abnormally tall man greeting folks in the lobby Anthony Cody? Yes, it is. The most prominent education blogger in the country is helping sell souvenir t-shirts!

And is that Melissa Katz – the 19-year-old teaching student setting the field aflame with her youthful activism!? Yep!

It’s like some science fiction story where the Internet came alive and started spitting out virtual people into the hotel lobby.

At first, I was simply speechless. I could hug, nod and take pictures, but that was about it.

But as the magic spell refused to fade away, I gradually accepted the reality of the situation.

These weren’t phantoms. These are real people.

I’ve spent hours messaging these individuals on-line. We’ve done much to steer the course of the resistance to corporate education reform. But nothing beats face-to-face interaction.

And the door kept popping open with more people I’d never even known existed who felt the same way I do about schools and learning.

In the short time I’ve been here, I’ve met a cloud of BATS from all over the country. We’ve talked about:

-The way Pearson standardization is seeping into college level teacher education courses. The complaint has always been that standardized tests don’t prepare students for college. And instead of fixing the tests, we’re dumbing down the universities!

-The way parents feel about their own children isn’t that much different than the way teachers feel about their students. However, it’s very difficult for each group to acknowledge they’re on the same side. How powerful we could be if we worked together!

-How education blogging is so much more authentic and free to tell truth to power than print or television journalism. Big money controls the media, but it can’t control everyday folks who feel compelled to write articles and publish them on-line.

And so much more!

Not a single conference has started, yet my brain is swimming with ideas. There are so many people I want to talk with and so many subjects I want to discuss!

In any case, it will probably be a long day tomorrow with some really tough choices to make. There are so many incredible presenters giving talks on so many important subjects – many at dueling times.

I feel energized and part of a growing community of people dedicated to righting the course of public education. The profiteers and privatizers have a war chest loaded with cash on their side.

But we’ve got people. Real people.

I’ll side with people any day.

(Watch this site for further updates throughout the weekend if I can find a spare moment.)

NOTE: This article also was published on the Badass Teachers Association blog and was mentioned in a post on Diane Ravich’s blog.

4 thoughts on “The Resistance is Real – They’re All Here at the Network for Public Education Conference!”