So there I was standing at a podium in Barnes and Noble before an audience of 25 people who had come to hear me talk about my book.

Speech uploaded to my iPad – check.

Fear that no one would take me seriously – Oh, double, triple check!

Let me just say there is a big difference between sitting behind a keyboard pounding out your thoughts for consumption on the Internet, and being somewhere – anywhere – in person.

But none of that is quite like being the center of attention at your own invitation, asking people to take time out of their busy lives and drag their physical selves to some prearranged place at some prearranged time just to hear whatever it is you’ve got to say.

I had been practicing my remarks for weeks after school.

I had a 15-20 minute speech ready to go – a distillation of the main themes in my book, “Gadfly on the Wall: A Public School Teacher Speaks Out on Racism and Reform.”

Would people hear what I had to say?

I surveyed the audience. A few people I didn’t know. But there was my mom and dad, a bit more grey haired than I remembered yet doing their parental duty. There were a few colleagues from work – teachers, aides and substitutes. There were a few students standing in the back with their parents. One of my old high school buddies even showed up though he lived about a half hour away.

And there in the second row was my daughter.

For a moment, the whole world seemed to be nothing but her 9-year-old face – a mix of emotions – curiosity, nervousness, boredom.

In that moment, everything else disappeared. I had an audience of one.

I spoke the words I had written weeks before, pausing to look up at the audience when I could.

Somehow I was both more and less nervous. I stumbled over parts that had caused no problems when alone. And I hit other points with more passion and purpose than ever before.

At certain points I found myself getting angry at the people behind the standardization and privatization of public education.

I rebuke these greedy saboteurs just about every week on my blog. But there was something different about putting the words on my tongue in public and letting the vibrations beat a rhythm on the ear drums of those assembled before me.

It was like reciting a spell, an incantation. And the effect was visible on the faces of those in front of me.

I glanced at my daughter, expecting her to be nagging her Pap to take her to the children’s section, but she was as entranced as the others.

And was I kidding myself or was there another emotion there? Pride?

I finished my remarks, getting a few laughs here and there. Anger and mirth in equal measure.

I thanked everyone for coming and took questions.

There were quite a bit.

Which aspect of corporate education reform was the worst?

Is there any way for parents to protect their children from standardized testing?

How has the gun debate impacted the move to privatization?

My mother even asked what alternative methods of assessment were preferable to standardized testing.

It went back and forth for a while.

When it seemed to die down, I thanked everyone for coming and said I would be there for as long as anyone would like to talk one-on-one and sign any books if people would like.

Thankfully, my wife brought me the nicest sharpie marker just before I got up there.

I tried to personalize as much as I could but everything seemed to be a variation on “Thanks for Coming.”

Students came up to me with huge grins. Parents asked more questions about their children. Lots of handshaking and hugs.

Teachers came up to tell me I had done a great job. Many introduced me to their kids – most itty bitty toddlers.

A former student who had already graduated got really serious and said, “It was about time someone said that.”

And it was over.

The store manager told me how many books we sold. I had no idea if that was good or bad, but he seemed well satisfied.

I packed everything up in my car and then went looking for my family.

I found them in the children’s section.

They had picked out a few books Mommy was purchasing. A really nice one about Harriet Tubman among them.

My daughter was sitting alone by a toy train set. She was worn out. It had been a long day.

“Daddy!” she said when she saw me. “You were amazing!”

And that was it.

That was all I’d needed.

She asked me about this or that from the speech. Obviously she didn’t understand the ins and outs of what I had said, but some of it had penetrated.

The rest of the time she held my hand and took me on a tour of the store.

I have hope for a better world, but if I’m honest, I’m not sure if writing this book or my activism or any of it will ever actually achieve its goal.

As ethicist Reinhold Niebuhr wrote, “Nothing that is worth doing can be achieved in our lifetime.”

But I’ve shown my daughter where I stand.

I’ve shown her where I think it’s appropriate to stand.

I’ve shown the same to my students, my family, my community.

They’ll do with that what they will.

I just hope that one day when I’m gone, my daughter will remember what I taught her.

She’ll remember and feel my presence though I’m long gone. 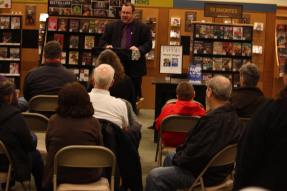 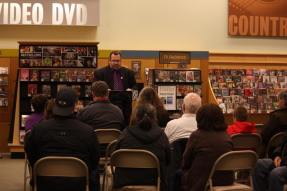 Videos of the majority of my speech: