Skip to content
HomeRandi and Lily, For the Good of Our Unions, Please Step Down. You Are a Distraction 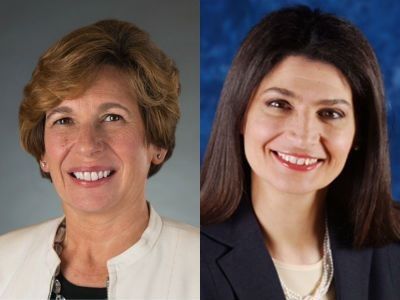 We are under attack by the new fascist wing of the Republican party.

So-called “right to work” laws are being drafted at the national level to strip us of our rights and transform us into the factory slaves of The Gilded Age. New court challenges at the state and federal level could make it next to impossible to collect dues without allowing countless free riders. And in the mass media criticism of teacher tenure is mounting despite widespread ignorance of what it even means.

More than ever we need to be united in our efforts to fight the forces of regression and tyranny. We need each other to protect our public schools and our students from those who would do them harm. But the biggest obstacle to doing that isn’t Donald Trump. Nor is it Mike Pence, Steve Bannon or even Betsy DeVos.

Frankly, as Presidents of the American Federation of Teachers (AFT) and the National Education Association (NEA), you have become a distraction.

When DeVos was blocked by protesters from entering a Washington, D.C., school this week, Randi actually took her side. She tweeted:

“Just heard a protester blocked & almost knocked Secy @BetsyDeVos down at Jefferson.We don’t condone such acts.We want her to go to pub schls.”

How dare you dictate to protesters what “we” want!?

This action may not have been something you, personally, condone. But DeVos just got away with purchasing her position as U.S. Secretary of Education. She and her billionaire family paid off mostly Republican lawmakers to the tune of $200 million allowing her to become the titular head of our nation’s public schools. This despite having never attended a public school, refusing to protect special education students, refusing to hold charter and voucher schools to the same standards, even refusing to keep guns out of our children’s classrooms! Well, Betsy, your money may buy you the title, but it buys you zero respect!

Randi, your statement just goes to show how tone deaf you and Lily are to the spirit of the rank and file.

We are not somewhat distressed at what is happening to our schools and our profession. We are enraged! We are taking to the streets! We are occupying our lawmakers offices and marching through community thoroughfares! And we aren’t throwing shade on other protesters behind the safety of Twitter.

For many of us, you both represent everything wrong with unionism. We are a people powered movement. We get our strength from the grassroots up, but you both try to rule from the top down.

Nowhere was this more apparent than in the early endorsements by both unions of Democratic candidate Hillary Clinton.

Neither one of you made an honest effort to gauge member opinions on these endorsements before going ahead. You thought you knew better. You pushed through these endorsements despite a strong vein of support for Democratic candidate Bernie Sanders.

Sanders was much more in-line with our needs and values. And he had much more support among progressives and independents. He had a much better chance of winning! Meanwhile, Clinton was just another neoliberal in a long line of neoliberals like President Barack Obama who would offer us only the back of their hands.

You wanted a seat at the table, and you didn’t mind how much it would cost the rest of us.

Lily, when you took the reins of the NEA in 2014, you famously said “We are what Democracy looks like.” I was never more proud of my union than at that moment. But that pride has turned to ashes in my mouth.

Many of us will never forgive either of you for the results of this election. We blame you for Trump.

Had you not dictated to us that we must support Clinton, had you supported a candidate with a real chance of wining, there is little doubt that we could have defeated the clown currently in the Oval Office. Moreover, under a President Sanders we would have had a real chance at a progressive future that benefits everyone – $15 minimum wage, universal healthcare, sanctuary cities, justice reforms, fair trade, free college tuition.

Trump did not win alone. Unwittingly, you were his biggest supporters. It was your hubris – along with that of corporate Democrats deaf to the voices of their base – that gave us these next four years. And none of you have learned your lesson.

We can wait you out if we must. But do what’s best for the people you claim to represent. Step down now.

Otherwise, you can look for opposition in our Representative Assemblies.

Let me be clear. I don’t think either of you have broken any by-laws. I don’t think there is evidence for impeachment (if our by-laws even allow it). But members could easily make a motion from the floor for a vote of no confidence.

Support may already be mounting for such positions at the Region level. It could go to the State House of Delegates as a New Business Item and get a majority vote from the floor. Or perhaps at our next Representative Assembly, someone will just make a motion.

I don’t know if it would pass. But I know that this division among us is holding us back from being the force we can be. I know that it has stopped many of us from talking about how we fight external forces, because we are instead focused on enemies from within.

We want to transform our unions. We no longer want to focus solely on collective bargaining. We want to focus on social justice and the needs of our students and communities. To be sure, our labor rights are essential to this fight, but they cannot be everything nor can we be willing to give up on the needs of our students if the powers that be will only leave our salaries and benefits intact.

We want a union that is more at home in the streets than in the boardroom. We want leaders who mobilize us to fight not tell us what to think. We need leaders that listen to us – not the other way around.

As a classroom teacher and education activist, I make this request in no official capacity for any of the various groups to which I belong. I ask as merely another member of the NEA. I have no affiliation with the AFT.

Moreover, I have nothing personal against either of you. We met briefly at the Network for Public Education conference in Chicago two years ago. You were both congenial and inspiring. It may not seem like it now, but I hold tremendous respect for both of you. I think in your own ways you have accomplished much that benefits our members.

But the time has come to step down. You believe in accountability. Hold yourselves accountable.

Put the strength of our unions first. Let it no longer be about you. Let it be about us.

P.S. – If any NEA or AFT member reads this open letter and agrees with the sentiments expressed here, please add your name and union affiliation in a comment on my blog.

43 thoughts on “Randi and Lily, For the Good of Our Unions, Please Step Down. You Are a Distraction”