Skip to content
HomeF- It! I’m Voting For Jill Stein

I have had it with this election.

Trump is a petulant, disgusting, fascist with terrible hair and a machismo complex. Clinton is a warmongering Wall Street lickspittle who smiles in your face as she secretly advocates policies that will hurt you and your family.

I simply refuse to choose between either one of them.

And before any of my so-called progressive friends start chiding me about third parties, let me just give you my reasoned argument: FUCK YOU.

No, I don’t want Trump to win. Yes, I agree Clinton is the lesser of two evils. But I simply cannot spend the rest of my adult life voting for evil.

Get real, people. When you keep choosing the best of the worst, it never ends. Do you really think things will be any different in four years? In eight?

The major parties will still give us a choice between dumb and dumber. I am done being a part of it. I’m opting out. Take your fake two-party Democracy and shove it.

When pundits and partisans talk about Presidential politics, they pretend it’s a game of chess. No. They think it’s fantasy football. Who won which debate? Who’s polling better with Latinos? Who’s got the most endorsements? They want you to take all this useless overcooked data and vote strategically, relying on the media to maximize the outcome regardless of the quality of the candidates involved. Unfortunately, it’s all baloney.

Few polls are actually scientific and even those that are given this dubious moniker are iffy at best. No matter what your opinion, you can find a poll or statistic somewhere to back it up. At least 60% of people know that!

This election has done a lot to foster my distrust of the media. The Associated Press calling primaries for Clinton before people were even done voting! Ignoring stories of voter irregularities! Giving Clinton debate questions ahead of time! Leaking a five year old video of Trump being a pig to bury Wikileaks emails that might otherwise hurt Clinton!

My God! We’ve gotten more actual news from whistleblowers in the past few years than journalists! And it’s pretty obvious why. The media is really just the public relations arm of the handful of corporations that own the dwindling number of newspapers, TV stations, search engines, etc. Very little makes it through the amalgamated filter that isn’t in the interests of the moneyed few.

Sorry. I prefer to think for myself.

There is just no reason to play games with your vote. It’s really quite simple. Vote for the candidate who best represents your values. That’s your only responsibility.

It’s up to each candidate to earn my vote. If I don’t cast a ballot for Clinton, I’m not a spoiler. She hasn’t done enough to prove to me that she’s the person for whom I should be voting. If that means she loses the election, it’s not my fault. She didn’t run a successful campaign. She didn’t give voters like me enough, she didn’t prove to us that she isn’t the same neoliberal lapdog of the elites that she’s always been.

She voted for the Patriot Act twice. She pushed for more troops in Afghanistan and US intervention in Libya. Her top donors are the same folks who crashed the economy – JP Morgan, Goldman Sachs, Morgan Stanley and Citigroup. She sold fracking to the world through the Global Shale Gas Initiative. She signed on to the Workplace Religious Freedom Act, which, according to the ACLU, would have effectively legalized discrimination, and she introduced a bill that would have made flag burning a felony.

I’m sorry. I don’t care how many pussies Donald Trump grabbed. I can’t vote for a person like that!

So why Jill Stein?

Easy. I’ve met the woman, and she’s the real deal.

No, she doesn’t have Clinton’s experience, but that’s a good thing. I’m not entirely satisfied with what Clinton did while Secretary of State, a U.S. Senator or First Lady. Better to hire someone with good intentions who has to learn on the job than someone who is immediately in a position to continue our endless series of petty wars, enrich the banks and compromise away protections for the environment.

As a father of a school age child and a public school teacher, education is my number one issue. Trump wants to tear everything down and give it all away to big business. Clinton wants to do much the same but more slowly and with a smiley face sticker on it. Stein is the only candidate who actually wants to help.

When United Opt Out held its annual conference in Philadelphia last year, Stein was the only candidate to actually come and speak with us. You read that right. She didn’t send a surrogate. She didn’t write a letter. She came in person and talked to us as a group and one-on-one. Heck! She even gave me a hug as a fellow activist working for change.

Now that’s a platform I can vote for without reservation.

However, I have no illusions that she’ll win. When tens of thousands of people can look at an admitted sexual predator like Trump with approbation, I know we’re just not ready as a species for a candidate like Stein.

We’re too stupid. Too racist. Too sexist. Too classist. Too much the evolutionary apes that conservatives refuse to believe in.

Yet those on the other side of the aisle are so civilized they’re willing to politely follow the leader over a cliff. They’ll ignore every criticism, silence any dissent as they’re given marching orders by the establishment all the while congratulating themselves for being so intelligent.

I’m not sure which is the bigger joke – this election or our electoral system. Trump whines that the election is rigged against him, and we laugh because he’s his own worst enemy. But the system is far from fair. You can’t tell me some of those primaries weren’t stolen from Bernie Sanders – people living in highly concentrated Sanders leaning districts facing long lines, closed polling stations and uncounted votes. Always against Sanders voters, hardly ever against Clinton or Trump supporters.

Even setting aside the crappy primary, look at our obsolete and eminently hackable voting machines. Look at our refusal to make election day a holiday. Look at our recent spat of voter ID legislation which makes it so much more difficult for the poor and minorities to cast a ballot.

This is the best system we can muster!? But of course it is, because the powers that be don’t want all of us to vote. They want just enough of us to foster the illusion of a democracy – a weak one that they can manipulate and control. They decided a long time ago they wanted Hillary Clinton to win. Trump is just there to scare the rest of us into voting for her so that we can pretend we had a choice.

I’m not saying things couldn’t go astray. If white nationalists come to the polls and everyone else stays away, we’ll have our new fuehrer. But the rich and powerful are betting on Clinton. She means stability for the market, she means the needs of business will be met and the rest of us will just sit back and take it because we had a “choice.”

Well, screw that. I’m not doing it.

I will proudly go to my polling place this November and give my vote to Stein. She’s earned it. 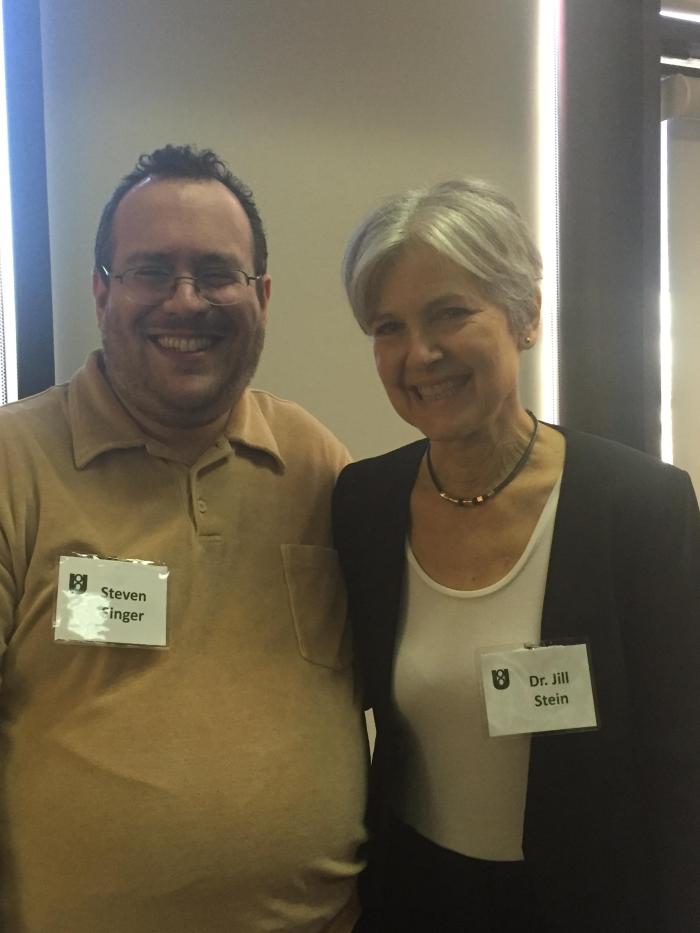