Skip to content
HomeHypocrisy: Democrats Criticize Trump but Not a Peep Against Emanuel 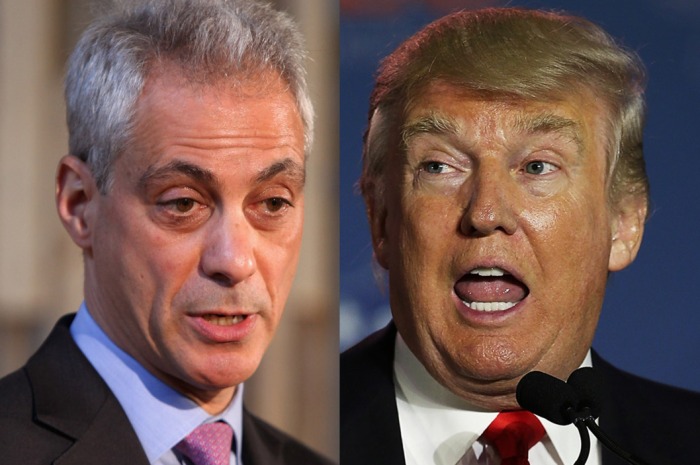 So Donald Trump is a narcissistic, bigoted, fascist.

Not exactly a surprise.

He’s also the Republican front runner for President. I’ll admit to being mildly shocked by that.

However, much more astonishing are the chauvinistic and possibly illegal actions of Chicago Mayor Rahm Emanuel – and the fact that no major Democrat of note is calling him out for any of it.

Trump made a name for himself during this election cycle calling Mexican immigrants rapists and murderers. Then he insulted women and the disabled. He proposes surveillance of mosques and registering all Muslims. He even incites supporters at his rallies to beat Black protesters.

And every time this happens, his poll numbers rise.

Predictably Democrats have decried this state of affairs. They have pointed their fingers accusingly at a Republican base that would champion such an odious figure for leader of the free world. And rightly so!

By contrast, Emanuel isn’t currently a candidate for anything. He’s a second term Democratic Mayor of one of the most populous cities in the country.

During that time, he has closed 50 public schools – 46 of which serve mostly black students. Southside residents had to resort to a month-long hunger strike to keep their last neighborhood school open. In addition, his economic policy consists of closing public health clinics for the poor and installing red light cameras to increase fines – none of which has actually boosted the economy.

But perhaps worse than all of that is the recent revelation that Emanuel’s administration with full knowledge of the Mayor may have actually covered up the police killing of an unarmed black teen!

In October, 2014, Officer Jason Van Dyke shot 17-year-old Laquan McDonald 16 times. Most of those bullets went into the teenager after he was already flat on the ground and the officer was at least 10 feet away.

As usual, the police story includes all the usual racist clichés – a trained and experienced officer of the law fears for his life from a black teen. Van Dyke says he was attacked. The dashcam video, however, shows no such thing. McDonald did not lunge at the officer. The young man was walking away when Van Dyke shot, and after he fell, the officer unloaded a barrage of bullets at his prone and seemingly helpless body.

Then the cover-up began. Emanuel allegedly was told about the incident in February, 2015, while he was in the midst of a contentious re-election bid. His administration quickly issued a $5 million settlement to McDonald’s family on the condition they keep quiet about the incident. It wasn’t until May, after Emanuel had won re-election, that an independent journalist asked for the dashcam video to be released. It took the full power of the media and a lawsuit to accomplish this. Last Thursday, a Chicago judge ordered the video be disclosed and Van Dyke was quickly charged with first degree murder.

It seems impossible to deny that Van Dyke would have been charged a year ago if not for the cover-up. The officer had already received 17 citizen complaints including that he had made racist remarks and three excessive force complaints over four years. Only Emanuel’s protection kept him out of jail.

So which is worse? Trump loudly champions prejudice and bigotry without the power to do anything about it. Emanuel protects an actual racist, stops him from being charged for what may well be a racially motivated murder, but makes no flashy public comments about it.

Yet only one of these two politicos gains the ire of the supposedly progressive and enlightened Democratic party.

How can this be? If we accept Fox News to represent a realistic presentation of the Republican platform, the party is often regressive, counterfactual, and rife with prejudice. On the other hand, media representations of the Democrats present them as the exact opposite. They propose progressive policies based on facts and a much more pluralistic view of society. They’re just much more inept at achieving this vision than their GOP counterparts.

But if that were true, how could one of their anointed, one of the most powerful Democrats in the country, a man who had been White House Chief of Staff at the beginning of President Barack Obama’s first term, a former U.S. Representative, senior adviser to President Bill Clinton, how could HE be perpetrating so many repressive, bigoted, “conservative” policies? How could so many leading Democrats support him? Why are so few criticizing him now?

It makes one question the perceived wisdom about the two parties. Is there really a difference, or are the left and the right wings just two parts of the same bird? When you look at what Democrats do – I mean when you actually examine the policies they enact when they’re in office – they really aren’t much different than those proposed by Republicans.

Perhaps there are a few far left Democrats like Bernie Sanders who actually represent a real progressive movement. Or perhaps there is no  major progressive party anymore in the United State.

We  must keep our eyes on Chicago. If there is any fight left for the soul of the Democratic party it will be here. Will the party call for Emanuel’s resignation? Or will it continue to side with one of the most regressive politicians currently holding office while it congratulates itself for condemning clownish Trump?

NOTE: This article also was published on Commondreams.org, the LA Progressive and on the Badass Teachers Association Blog.

15 thoughts on “Hypocrisy: Democrats Criticize Trump but Not a Peep Against Emanuel”