Skip to content
HomeI am a Public School Teacher. Give Me All the Refugees You’ve Got! 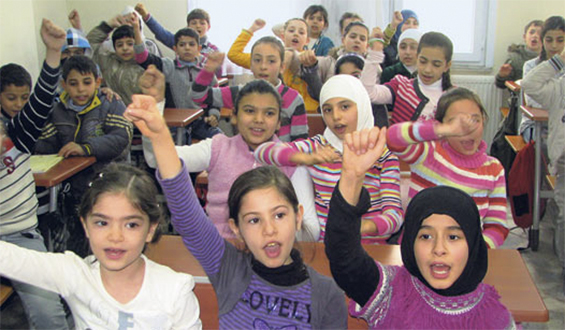 Come into my classroom any day of the week and you’ll see refugees.

That little Iraqi boy slumped over a book written in Arabic while the rest of the class reads the same story in English. Those twin girls blinking back memories of the Bosnian War as they try to underline possessive nouns on an English worksheet. That brown-skinned boy compulsively rocking back-and-forth in his seat fighting back tears wondering when his dad is going to come home from prison.

Every day, every hour, every minute our public schools are places of refuge for children seeking asylum, fugitives, emigres, exiles, the lost, the displaced, dear hearts seeking a kind word and a caring glance.

Some may shudder or sneer at the prospect of giving shelter to people in need, but that is the reality in our public schools. In the lives of many, many children we provide the only stability, the only safety, the only love they get all day.

And, yes, I do mean love. I love my students. Each and every one of them. Sometimes they are far from lovable. Sometimes they look at me with distrust. They bristle at assignments. They jump when redirected. But those are the ones I try to love the most, because they are the ones most in need.

I told a friend once that I had a student who had escaped from Iraq. His parents had collaborated with the U.S. military and received death threats for their efforts. So he and his family fled to my hometown so far away from his humid desert heartland.

I told her how difficult it was trying to communicate with a student who spoke hardly any English. I complained about budget cuts that made it next to impossible to get an English Language Learner (ELL) instructor to help me more than once a week. And her response was, “Do you feel safe teaching this kid?”

Do I feel safe? The question had never occurred to me. Why wouldn’t I feel safe? I don’t expect ISIS to track him down across the Atlantic Ocean to my class. Nor do I expect this sweet little guy is going to do anything to me except practice his English.

In one of my first classrooms, I had a dozen refugees from Yugoslavia. They had escaped from Slobadan Milosevic’s ethnic cleansing. Yet you’d never know unless they told you. They were some of the most well-behaved, thoughtful, intelligent children I’ve had the pleasure to teach. They were always smiling, so happy to be here. They approached every assignment with a seriousness well beyond their years.

But sometimes you’d see a shadow cross their faces. Rarely you’d hear them whispering among themselves. I was so new I didn’t know any better but to come down on them. But later they told me what they had been talking about, what they had been thinking about – how Henry V’s military campaign brought back memories. They taught me that day. Every year I learn so much from my children.

Last week one of my students walked up to me and said, “I’m having a nervous breakdown.”

Class had just been dismissed. I had a desk filled to the ceiling with ungraded essays. I still had to make copies for tomorrow’s parent-teacher conferences. I had gotten to none of it earlier because I had to cover another class during my planning period. But I pushed all of that aside and talked with my student for over an hour.

And I’m not alone. On those few days I get to leave close to on time, I see other teachers doing just like me conferencing and tutoring kids after school.

It was a hard conversation. I had to show him he was worth something. I had to make him feel that he was important to other people, that people cared about him. I hope I was successful. He left with a handshake and a smile.

He may not be from far away climes, but he’s a refugee, too. He’s seeking a safe place, a willing ear, a kind word.

So you’ll forgive me if I sigh impatiently when some in the media and in the government complain about the United States accepting more refugees. What a bunch of cowards!

They act as if it’s a burden. They couldn’t be farther from the truth. It’s a privilege.

When I see that iconic picture of three-year-old Syrian boy Aylan Kurdi drowned in Turkey as his family tried to escape the conflict, I find it impossible that anyone could actually refuse these people help. Just imagine! There are a host of others just like this family seeking asylum and we can give it! We have a chance to raise them up, to provide them a place to live, to shelter them from the storm. What an honor! What a privilege! What a chance to be a beacon of light on a day of dark skies!

I’m an American middle class white male. My life hasn’t been trouble free, but I know that I’ve won the lottery of circumstances. Through none of my own doing, I sit atop the social ladder. It is my responsibility to offer a helping hand in every way I can to those on the lower rungs. It is my joy to be able to do it.

It’s what I do everyday at school. When I trudge to my car in the evening dark, I’m exhausted to the marrow of my bones. But I wouldn’t have it any other way.

It’s not uncommon for a student or two to see me on the way to my car, shout out my name with glee and give me an impromptu hug. At the end of the day, I know I’ve made a difference. I love being a teacher.

So if we’re considering letting in more refugees, don’t worry about me. Send them all my way. I’ll take all you’ve got. That’s what public schools do.

NOTE: This article also was published in Everyday Feminism, the LA Progressive and on the Badass Teachers Association blog. It was also quoted extensively in an interview the National Education Association did with the author.

52 thoughts on “I am a Public School Teacher. Give Me All the Refugees You’ve Got!”