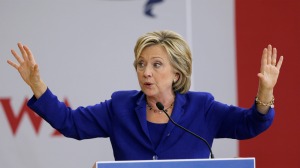 Bad news! She has no interest in solving them! In fact, she thinks charters are just great.

Most charter schools — I don’t want to say every one — but most charter schools, they don’t take the hardest-to-teach kids, or, if they do, they don’t keep them. And so the public schools are often in a no-win situation, because they do, thankfully, take everybody, and then they don’t get the resources or the help and support that they need to be able to take care of every child’s education.

And all over the country, teachers, parents and students rejoice. Someone actually notices our problem!

Charter school scandals seem to hit the paper with the regularity of a grandfather clock. Charters cut student services and boost overhead to produce profit. Charters rack up debt and then sell it for a profit. Charters fudge the paperwork so they get paid for students who don’t actually attend. And just as Clinton said, they push out the children who are most in need and hardest to teach.

In short, most charter schools stink. Clinton admits we have a problem. But how do we solve it?

So Clinton’s solution to the charter school crisis is what exactly? She seems to be saying that charter schools have major problems, but the best way to fix them is to redouble our belief in this flawed and failing system.

It sounds like a line from Peter Pan: Clap your hands, children, and Tinkerbell will live! You just have to believe! Oh! Close your eyes and believe in charter schools, and they’ll be all fixed!

It’s a non-answer, an evasion. It’s the kind of politics Hillary Clinton excels at – say something so empty and middle-of-the-road that both sides of a position can find something to like about it. Take something and focus group the hell out of it until it’s almost meaningless.

The problem is that this kind of spin doctoring doesn’t help improve our schools one bit. It’s really an endorsement of the status quo. After all, what solution has she offered here?

If you aren’t paying attention, it sounds like a commitment to fix our charter schools, but it’s actually just a commitment to gift wrap them more of your tax dollars with zero accountability.

Notice what Clinton said about choice. She supports parents having a choice between various kinds of public schools – but not parochial and private schools.

Choice!? What a bunch of baloney! By and large parents don’t want to have to shop around for a school the way you would melons at the grocery store. Weigh them in your hands, look for soft spots and hope they’ll be sweet once you cut through the rind.

Parents want all public schools to be excellent. “Let The Buyer Beware” is a poor principle on which to found our system of public education.

Mrs. Clinton, who exactly are you trying to give choice to – parents or corporations? Do you want parents to be able to choose between several mysterious options or do you want to give corporations another market in which to make a profit?

So Clinton is against private schools if they’re called private schools, but if we call them charter schools, they’re just peachy! Wow! There’s such a world of difference between that view and Jeb Bush’s!

Thanks a bunch, Mrs. Clinton. That’s a mighty progressive position you’ve got there. You’re going to support public schools by allowing parents to opt out of them? This is the best the Democrats can do these days!? Yikes!

And please spare me the nonsense about the original purpose of charter schools. They were supposed to be laboratories to try out new things that would eventually get applied in the traditional public school setting!? That has never happened! Not once! No one has ever looked at the charter school model and said, ‘Gee! They’re really doing such a great job! Let’s do that here!” unless it was in terms of the Cadillac funding they often receive while public schools strive to get by on what’s left between the couch cushions.

If most charter schools are abusing that freedom by pushing out needy students, why not take that power away? Why not support a national moratorium on any new charters? Why not investigate every existent charter and close down the ones that aren’t effective? Why not take the money saved by such a venture and use it to invest in the traditional public school system that has proven time-and-again to be the best educational alternative for our nation’s children?

Instead of pretending to offer choices, why not make sure every public school is excellent and allow parents and students choices within those schools such as whether they want to take art, music, foreign languages, extracurricular activities, etc.?

Why? Because those would be real solutions, and if there’s one thing politicians hate, it’s solving problems.

If Clinton did that, she might offend someone. She’d lose votes. Better to try to appear to be pleasing everyone.

And thus she pleases no one.

NOTE: This article also was published in the LA Progressive and on the Badass Teachers Association blog.