Skip to content
HomePunching Teachers in the Face – a New Low in Presidential Politics. 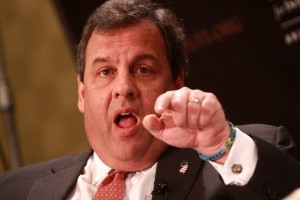 Chris Christie wants to punch me in the face.

I’ve never even met the man. I don’t even live in New Jersey!

But in an interview, the Republican presidential candidate told the media that the national teachers union deserves a punch in the face.

Gulp. I guess that means me.

After all, I AM a public school teacher. I DO belong to one of those nefarious teachers unions.

I must deserve it. My colleagues – most of whom are women – and I must be asking for the NJ Governor to bop us on the nose.

Well come on, Governor. Hit me with your best shot!

One day historians may look back on Christie’s statement as a new low in electioneering. And this campaign season, that’s really saying something!

A candidate from one of the major political parties actually thinks threatening teachers with physical violence will gain him votes.

Look at it from his point of view. Christie is one of 17 Republicans running against each other for the party’s nomination. The first GOP debate is coming up and they’re only going to let the top 10 Republican candidates participate. And Christie’s popularity is low enough that he might get left out in the cold.

What’s a guy to do? Well the frontrunner, Donald Trump, earned his lead by saying the most outrageous things he could think of – namely that Mexican immigrants are rapists and thieves. And – WOOSH! – up went his poll numbers! Mike Huckabee compared the Iran deal to the Holocaust and watched his poll numbers rise, too.

Heck! If it worked for them, might as well try the same thing, Christie style! Let’s punch teachers!

This is strange for two reasons: (1) the governor of a populous state is actually resorting to the schoolyard rhetoric of an 8-year-old to characterize his presidential policy, and (2) who he’s targeting.

Can you imagine a U.S. President – not a candidate but a duly elected Commander-in-Chief – speaking to the nation this way?

“Today the state of our union is strong because my administration has punched the teachers in the face. We’ve also thrown welfare moms off the top ropes, put illegal immigrants in a sleeper hold and kicked planned parenthood in the groin!”

But notice that Christie isn’t talking this way about Welfare, Immigration or Abortion. As usual, he’s saving his most bitter rancor for teachers.

Can you imagine him speaking like this about any other public employee? Would he challenge postal workers to a knife fight? Would he threaten to pistol whip firefighters? Would he dare promise to drop kick police officers?

No way! For some reason educators really bug him – always have. He has a reputation for shouting down and bullying teachers in his state.

A psychologist might easily look at Christie and say he’s overcompensating.

A 52-year-old who probably couldn’t beat up an egg with an egg beater continues to talk as if he’s a street tough. A grown man who is still apparently intimidated by people with any kind of learning or book smarts continues to attack education and educators.

It would be pathetic if the stakes weren’t so high.

Ultimately the success or failure of such tactics is up to the voters. Do they really want presidential candidates to talk this way?

Once upon a time, politicians ran for office based on what they were going to do for you once they won. Now they generate as much contrived reality TV drama as they can in the hopes this will get a nation of couch potatoes to go to the polls.

It’s as if campaign managers are taking their cues from the most thriving kind of democracy we have left – the televised kind. They’re emulating shows like American Idol or American’s Got Talent. Make a big noise, put on a freak show and try to start a fight. We used to justify this as truth. Remember one of the first shows in the genre, The Real World, used to begin every episode with the line, “What happens when people stop being polite and start being real?”

But it was never real. It was always pre-packed, pre-planned, pre-arranged crap that could only exist because we pretended that’s how people really act!

Now that’s how we run for president.

We used to have Kim Kardashian, Kate Gosselin and Snookie.

Now we have Donald Trump, Mike Huckabee and Chris Christie.

Cynics say these kinds of shenanigans will just serve to make far right ideologues like Jeb Bush look increasingly rational because they have more self control.

But I wonder if these are really optimists. Given the choice between the fake adult and the clown, the public may pick the clown.

Politics may really have sunk that low.

If only we had spent more time listening to our teachers instead of punching them.

NOTE: This article also was mentioned on Diane Ravich’s blog and published in the LA Progressive and on the Badass Teachers Association Blog.

29 thoughts on “Punching Teachers in the Face – a New Low in Presidential Politics.”