Skip to content
HomeConfession of a Standardized Test Proctor 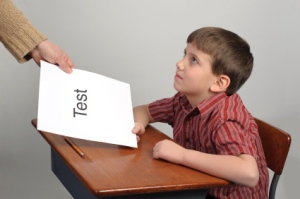 Hello. My name is Steven.

And I’m a standardized test proctor.

I’ve been a proctor for over 10 years now. I used to be a teacher. Some days I still get to be one, but most of the time… I’m just a proctor.

I give my students standardized tests.

And I make them do test prep.

(Breaks down. Someone walks up behind him, claps him on the back and whispers in his ear. Encouraging noises from the crowd of people sitting in folding chairs around the room.)

Let me start with the box.

The box came to my middle school classroom right before Christmas break. You know the one. Like a cinder block made of cardboard.   A high school student brought it down from administration. She shook it like a huge maraca and asked, “Mr. Singer, where do you want it?”

For a second I had no idea what it was. Then I remembered – it was almost time again to take the GRADE Test. And I knew what it was – a box full of those black and green test booklets, Scantron sheets wrapped in plastic, a box of No. 2 pencils, a monitor’s booklet, scratch paper, student rosters and ID numbers… Everything I wanted for Christmas.

So I put it on the shelf, went on teaching and forgot about it until December was over, until after the holiday break.

I didn’t want to even think about it.

But when I came back to school in January all rested and raring to go, I saw it there like some sinister Elf on the Shelf.

So I put it off for another week. No rush. I had until the end of the month to make my students take it.

I couldn’t have them come into my classroom and first thing take a standardized test. That would have been heartless. They didn’t come back to school to fill in bubbles. They wanted to do something interesting, something that they really cared about.

They wouldn’t admit it, but they wanted to learn Goddammit!

And I wanted to teach!

(Grumbling) TELL US ABOUT IT!

TELL US ABOUT THE WEEK BEFORE YOU TESTED!

It was great. We read S. E. Hinton’s The Outsiders. Or at least a few chapters of it.   The kids couldn’t put it down. If there were only a few minutes left in class, they didn’t want to stop reading – they wanted to keep going.   We wrote journal entries about what we might have done in the characters’ places, examined the use of slang and how it has evolved over time.

We participated in a Socratic Seminar discussion where we made connections between the novel and our own lives, explored gender issues, the role of socioeconomic status and race – it was higher level thinking all around. You know? The stuff they tells us we’re supposed to teach – the stuff all the research tells us helps learners grow.

But it didn’t last. The week ended. And I had to give the GRADE Test.

You know, it’s funny. Working in a poor school district like mine, you hear a lot about accountability. If administrators don’t enact this reform, or teachers don’t do that paperwork or students don’t score this high – they’ll close us down. But no one talks about holding politicians accountable for making sure we have the resources we need.

Case in point: when I came back from break, the fan in my room’s cooling system had broken down. I have no windows and the air wasn’t circulating. It was hot and muggy and miserable. Yes, in January with arctic temperatures outside!

I asked the grounds keeper and administrators to do something about it, but was told repeatedly “the part is on order.” Nothing happened.

The first week wasn’t too bad. We managed. But it wasn’t until the second week – when I gave out the test – that it went from annoying to miserable!

(He pauses, shaking his head.)

I don’t know. Maybe it wouldn’t be so bad if it was a different test, but the GRADE…

They call it a reading diagnostic test because it’s supposed to diagnose the kids’ deficiencies in reading. But it doesn’t do that for a host of reasons – chief among them the fact that kids take the same exact test over-and-over again for at least three years!

That’s right! No variation! The same questions in the same order three times a year – year-after-year. Heck! This was the second time they were taking this same test just this year alone!

Sure there’s one alternative version we COULD give to mix things up, but administration rarely lets us do that. And even if we did, it wouldn’t help that much.

What’s worse, it isn’t even aligned with the high-stakes tests kids have to take in March and April!

Yeah! They stick a gun to our heads and say if your students don’t score well on the all-or-nothing, win-or-lose state tests, we’ll label you a “failure,” cut your funding or close you down.

So you’d think we’d practice – try to do look-alikes and get comfortable with the format and everything.

But the rehearsal we’re forced to do is the GRADE test! That’s like practicing a layup when you’re getting ready for the chess tournament!

The preparation doesn’t reflect what students will be asked to do when it comes to the make-or-break exams!

We used to have kids take a diagnostic test called the 4SIGHT. It wasn’t perfect. Kids took it on computers, but there was an essay section they’d write on paper, too, that I was actually allowed to grade, myself!

I thought there were better uses of class time, but at least the 4SIGHT was actually a good dry run for the kind of high-stakes tests they were going to take later in the year. And sections they took on the computer gave you a score immediately.   It was something you could look at as a rehearsal, as reducing test anxiety, as providing you data you could use to make decisions about the students.

Yeah! As if you’d need it! Any teacher who knows his students so poorly that he needs standardized tests to tell their strengths and weaknesses is a pretty poor teacher.

The only reason we changed to the GRADE Test in the first place is because the district got a grant from the state.   First, the governor and legislature slashed our budget, then they offered to give us back a small portion of it if we enacted certain reforms – one of which was to replace our somewhat helpful diagnostic test with a totally useless Pearson product.

Come to think of it – 4SIGHT was also made by Pearson.

And the time it takes to give this thing! There are only four sections – Vocabulary, Sentence Completion, Listening Comprehension and Passage Comprehension. But it takes a minimum of two days – and I have double periods! That’s two 80-minute sections – actually more like three so I can give the make-ups!

That’s right! If a student is absent, I have to somehow proctor the whole thing over again just for him. Administration says it’s too hard for them to pull students out of class and give the make-ups, themselves. So I’m forced to give busy work to students who completed the assessment so they have something to do while the stragglers catch up.

So to review: today was day three of testing. Day six if you count the first time I proctored this darn thing. And three more days will be coming in May.

This is day seven of no air flow. Kids sitting at their desks like they’re half dead. Sad, bored looks on their faces, and I completely sympathize but I’m the one who’s forced to do this to them!

Every now and then one of them asks, “Why are we doing this, Mr. Singer? Will this affect my grade?”   And I find the lies hard to get out. Because, no, it won’t affect your grade. There’s really no good reason you’re taking this, except that some of those books on the shelf you enjoy during sustained silent reading were bought with money we get for making you go through this nonsense.

I used to believe in standardized testing. I did!

When I first started teaching it made a certain kind of sense. We had the Pennsylvania System of School Assessment (PSSA) tests then. My 8th grade kids took one in Reading and one in Writing.

It was challenging but at least the expectations were clear. I knew exactly what kinds of things they would be tested on and what they were expected to do.   There were reams of remediation material available, and I could have my pick of the best – the clearest and most engaging – as test prep materials go.

But then Pennsylvania adopted Common Core – or at least it adopted the look-a-like PA Core – and had to develop new tests!   Today, high school students take a test called the Keystone and middle schoolers still take the PSSA. But they’re both just different versions of the PARCC test with a Pennsylvania-sounding name on it. We just pretend it’s something new and ground breaking.

That might be acceptable if the PARCC was a valid assessment. However, it’s notorious throughout the country for being designed to fail students – not fairly evaluate them.   Moreover, the state Department of Education is extremely stingy with examples teachers can look at so we know what’s on the test. I doubt even they know what’s on it because they keep changing it from year-to-year.

So all of my remediation material is almost useless. I can’t even buy something new because it takes several years after a test is developed for the preparatory material to appear, and we’re still chasing a moving target!

And on top of all that – the state is forcing all schools to use the scores from these tests to evaluate teachers performance!

We use incomplete test prep and unaligned pretests to prepare for more tests that don’t fairly assess student learning – and then use these invalid scores to blame teachers and bemoan the state of education!

(Someone walks up behind him and whispers in his ear. Hands him something.)

I get this… chip?

(Cheers! He looks it over.)

I’ve accepted my lot for one week?

(Volume gets louder on applause.)

(The crowd rushes to the stage and engulfs the speaker. More and more approach. They just keep coming – more than could possibly fit in this room. The clamor continues to gain in volume until its unclear whether its celebratory cheering or out of control insanity. One word is heard through it all until even it cannot be made out in any distinctness.)

10 thoughts on “Confession of a Standardized Test Proctor”